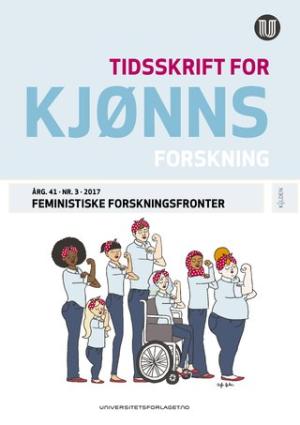 In this issue the topic is feminist research fronts. What are important issues and connections to gender research today? And how does gender research engage with current challenges in our time.

This article discusses citizenship in a disability perspective. Today, the term citizen is understood as universal. All human beings are recognized as citizens with rights and duties. However, feminists have argued that the conception of citizen is heavily influenced by male stereotypes. Next, feminism has been criticized for not including disability as a dimension of the critique. Thus, the term citizenship must be reconsidered and reformulated in light of human plurality. In this article I discuss how citizenship can be understood as universal. I begin with a short historical overview of citizenship in a western contexts and then focus on gender and impairment/(dis)ability as categories. Next I unfold gender and (dis)ability as complex phenomena and identify two dilemmas in relation to the intersection of these categories, selective abortion and the need for care. In the last part of the article, I offer an understanding of universal citizenship inspired by Martha Nussbaum’s Capabilities Approach. Care, support and accommodation for citizenship are crucial for practicing citizenship. I argue that citizenship as universal should be understood and practiced as relational. Citizens live in relations characterized by often asymmetrical interdependency.