Gender and equality after #MeToo 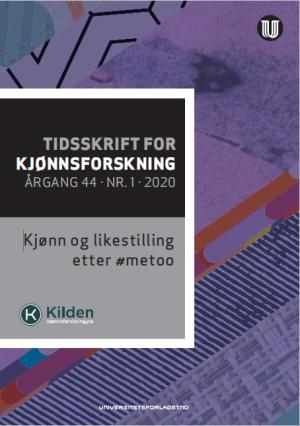 The topic of this first issue in 2020 is gender and equality after #MeToo, and deals with sexual harassment, violence and abuse within different fields of study. Among the contributions in this issue, you can read about sexual harassement in various parts of working life, about excluding humor in the military, rape in Greco-Roman mythology, and how epistemic injustice and implicit bias influences everyday praxis. You will also find commentary articles dealing with the aftermath of #MeToo.

In both the Danish and Norwegian military, we have seen how an extensive use of humor makes work more fun for some soldiers, while having a negative effect on others. Not least women who are often victims of the humor – a group already at the edge of this traditional male bastion. In this paper, we focus on the types, function and explanations for this excluding use of humor.

It can be debated whether this use of humor is a deliberate tool or «just a joke» but the result is often that one has to put up with more than what feels comfortable or even being a target for jokes or ridicule. But if laughing at others’ teasing or even coming up with jokes yourself is a sign that you are part of the group, who would then want to be a killjoy by saying «stop»?

We contextualize this humor with matters of cultural demarcations of what might be considered acceptable in the military and present it as an example of the problems that go beyond removing structural obstacles for gender equality. Theories of homosociality and hegemonic masculinity are also employed. Finally, we provide examples of strategies for countering this type of exclusive practice.

In the fall of 2017, #MeToo became a synonym for sexual harassment experienced in a job context, and the collective response from women in various occupational groups testified about sexual harassment as a widespread problem in Norwegian workplaces. This article discusses questions about how sexual harassment works in different contexts and why sexual harassment as a work environment problem apparently received little attention out in the workplaces before the #MeToo campaign. The empirical material is based on different surveys in the period 2016–2018 in four different industries and occupational groups: health and care, hotel and restaurant, performing and creative artists and doctors. The article shows how challenges related to sexual harassment in work vary for these groups, and how organizational and structural conditions affect vulnerability. There are high thresholds for reporting sexual harassment at work. Fear of consequences for further job and career opportunities, perceptions that experiences are not serious enough, or that sexual harassment is normal and something that must be accepted as part of the business or professional culture, are important reasons why this received little attention before #MeToo.

From Everyday Praxis to Structural Injustice

The «#MeToo movement» has led to an increased awareness of the kind of structural injustice that makes it hard to identify, and get rid of, sexual harassment and gender discrimination. My paper is not about the #MeToo movement or sexual harassment per se, but about the kinds of injustice embedded in ways of communicating and in how we assess each other’s statements and behavior. The first part of my paper discusses how epistemic injustice and implicit bias are present within our everyday social practices. The aim is to show how these forms of injustice contribute to supporting collective frames of interpretation that need to change in order to realize gender equality. In the second part of the paper, I argue that the best solution to avoid the negative effects of implicit bias, and epistemic injustice, is not to focus on an individual’s moral character, but to make institutions responsible. I discuss two reasons why this should be a case for institutions. First, it is hard to make people morally responsible for biases which they are unaware of. Second, structural injustice is often rooted in individual actions that are not in themselves unjust. The injustice occurs when these small actions aggregate into structural patterns of inequality.

From Helga Hernes to #MeToo

The article elaborates on the four central features of «the women-friendly social democratic citizenship ideal» as depicted by the Norwegian political scientist and social democratic thinker Helga Hernes: anti-liberalism, the emphasis on both political participation and social rights, and the idea of the polity as a community of shared values. Particular emphasis is put on the relationship between this citizenship ideal and developments in Norwegian gender equality policy. The article also discusses how #MeToo could be understood in light of social democratic feminism and other branches of feminist theory. The significance, and limitations, of radical feminism, are given special consideration.

When the Court Does Not Offer Justice, or Not Enough Justice

The last few years, personal stories about sexual violations have reached many via social media. This creates opportunities for recognition and justice that victims and others have claimed that the criminal justice process cannot deliver. At the same time, this challenges the rule of law. Inherent in how Norway approaches criminal justice is the right to due process and to anonymity, both for those charged, those acquitted and those convicted. That someone labels an experience they have had as rape, cannot alone serve as evidence that a rape has occurred. How can we then understand the relationship between individuals’ right to speak their truth and the needs of society and the rights of claimed perpetrators?

From #MeToo to Sex at Work

In 1992 the results from our collective research project on sexual harassment was published in the book «Sex at Work» (Brantsæter and Widerberg). The response was dead silence; it was not made a theme either in research or in politics. Was our understanding of the «phenomenon» so different from the one #MeToo has been so successful with? Or is it the situation that has changed, and if so, what and how has changed so dramatically? In this article an account is given of the methods and theoretical understandings we used and developed in order to study sexual harassment. It was a pioneer work regarding both methods and understandings, just as relevant, fruitful and impressive today as it was then when we were before our time. Rather than the understanding, it is the situation that has changed: the dominance of social media, the starting point in professions and workplaces – making it a cultural and structural, rather than a personal issue – and last but not least, the breakthrough of the equality struggle on the grassroots level. The varied amount hereof can also explain why #MeToo has had a different impact in the Nordic countries. The role of feminist researchers within this struggle, is another explanation of the Nordic differences.