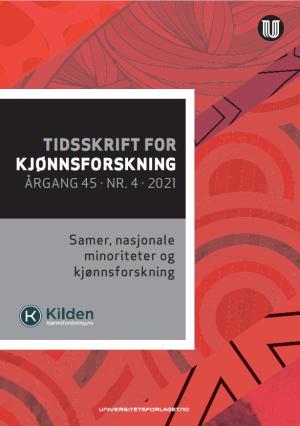 The topic of this fourth issue is Sámi, national minorities and gender research. Read about how gender and culture are understood in Sámi mental health care, and about how Sámi history not only has been suppressed, but also falsely portrayed in the past and the present. You can also read the considerations two researchers make concerning their research on minority groups. In addtition to these thematical articles, you can read an analysis of how the court constructs credible rape victims.

Articulations of Gender and Culture in Sami Mental Health Care

In this article, I examine how understandings of gender and culture are articulated by employees in the field of Sami mental health care. These articulations can reflect both positive and negative discourses about gender and culture in Sami communities. The article is based on qualitative material where I have interviewed people who work with mental health care in Sami areas. I am inspired by Judith Butler’s (1990) theory of performativity, where gender is created and recreated through performative actions. I combine this with perspectives on myths and realities (Kuokkanen 2007; Nystad 2003) related to understandings of gender in Sami communities. I argue that employees in mental health care must reflect on how they themselves can potentially contribute to reinforcing negative stereotypes in encounters with Sami patients, by unreflectively reproducing them, which can give the Sami patients poorer health service.

Yhđessä – Together for Kven Worldings: Situatedness and Academic Accountability in the Research Process

This article discusses methodological aspects of an ongoing research project on Kven worldings. The work is inspired by Donna Haraway’s perspectives on situated research. A metalogue, where the authors share reflections and discuss their maneuvers as researchers, makes visible some of the ontological and epistemological troubles the researchers are facing related to the philosophical research approach, what kind of knowledge the researchers are in position to produce, and what it can mean to be allies with the Kven communities to/from which the research speaks. The article supports critical transgressive research, as part of a diverse and broad opposition to injustice. Via the building of alliances and relations, and a critical consciousness around situatedness, the authors argue for a collaborative effort to develop knowledge.

How does a photo of a Lule and forest Sámi woman taken in 1868 relate to a conversation between mother and daughter in a kitchen over a hundred years later? In this article, I take as my point of departure a picture of my grandfather’s grandmother’s sister, the forest and Lule Sámi woman Brita Stina Larsdotter Rim from 1868, whom I met in 2008 for the first time in a web exhibition, and a crucial kitchen conversation in Swedish with my mother in the 1990’s. Brita Stina’s face can still be found via the Nordic Museum made available online, without restrictions, without ethical protocols, and without Brita Stina’s life story being presented. To analyse my meeting with Brita Stina’s picture and the link to my family’s invisible Sami history is a recap – an attempt to use the picture in a Sámi way. It is a contribution to Swedish colonial and settler colonial history, and thereby a contribution to the research on Nordic, European and women’s history. I challenge how this history is written and how it is reproduced in museums, in school and university teaching, in textbooks and in course literature.

The Power of Confessions: An Analysis of How the Court Constructs Credible Rape Victims

In recent years, rape verdicts against high-profile men have attracted attention from feminists because they are interpreted as a sign that female rape victims are finally believed in court. In this article, I take a closer look at three rape convictions, all of which include a large number of female rape victims – in the public known as the «kulturprofil-case», the «danser-case» and the «basketball-case». I examine how the court has interpreted the evidence in the cases and how it has conducted the credibility assessments. Furthermore, I analyze how the court, through its reasoning of the verdict, constructs credible rape victims. The starting point for the analysis is that the court is an arena where there is a struggle for the truth, through competing narratives, where different norms, expectations and power relations apply. The analysis takes a critical look at the idea that women are now, to a greater extent than before, seen as credible and instead tries to understand the conditions for the court’s credibility assessments. I argue that the conditions are changing, but that these changes do not represent a break with previous practice, rather a continuity, where the court in the «kulturprofil-case» becomes more concerned with gaining insight into who the victims (really) are, as expressed in narratives and evidence about the victims’ subjective experiences, thoughts, feelings and psyche. The article shows that confessions and narratives about the victim’s self are valued more highly in the «kulturprofil-case» than in the «danser-case» and the «basketball-case».