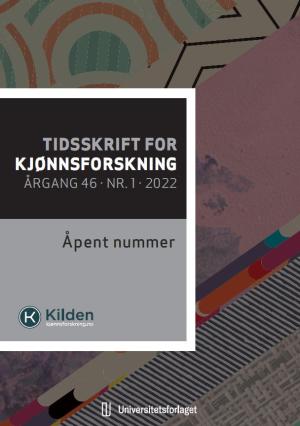 The first issue in 2022 is an open issue. Still, all of the articles have a common theme: motherhood. You can read about infanticide, soundness of mind and unwed mothers in the Norwegian Criminal Code of 1902, about bodily experiences of mothers of young children trying to balance domestic and professional work, and about motherhood and mental illness.

“the Feverish, Partially Unsound Mental Condition, That Birth Brings About»
– Infanticide, Soundness of Mind and Unwed Mothers in the Norwegian Criminal Code of 1902

The Norwegian Criminal Code of 1902 established a lenient sentence for infanticide committed by unmarried mothers, substantiated by arguments of a weakened mental condition. In this article, I discuss how the Norwegian Infanticide Act was understood by lawyers and physicians in the period 1905–1981. The article is based on the legislative history of the 1902 Criminal Code, summaries from infanticide cases that went before the Supreme Court and medical literature. I argue that the weakened mental condition that unwed mothers were assumed to suffer from during infanticide was understood as a social condition and not necessarily as a medical condition.

The Sensitised Body: A Phenomenological Study of Caring Experiences and Health Among Mothers of Young Children

Women experiencing pregnancy and maternity have distinct bodily experiences. Existing research addressing how mothers of young children balance domestic and professional work provides an insight into different mental, social and cultural conflicts which may have health-related implications. Drawing on an embodied phenomenological perspective, the aim of this study is to develop knowledge about how working mothers of young children experience their bodies in the act of caring daily for their children, and in what ways these experiences may illuminate health and vulnerability of mothers of young children. The study is based on nine qualitative in-depth interviews with selected mothers who each worked approximately full-time and had two children in kindergarten. The empirical material was analysed using thematic analysis. This article explores the body as the basis of care and conflicts regarding ways ‘to do’ and ‘to sense’ embodied experiences of care. The mothers’ bodily experiences are interpreted as sensitised bodies towards their children. The exhausted body is understood as particularly vulnerable. The body as continuously present and prepared, and efforts to equalise the parenting bodies are understood as crucial for this vulnerability. Through interpretation and concept development, this study highlights and generates new awareness about the relationship between bodily experiences of care, gender and health.

Mothers in Crisis. Motherhood and Mental Illness in the Drama Comedy Series The Breastfeeding Room