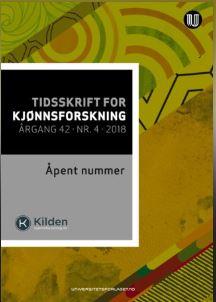 The fourth and last issue in 2018 contains four scientific articles. Read about menstrual experiences from the 20th century, an analysis of sex education from 1916, about lesbian and gay representations in computer games and ethnography as a method of investigating intersectionality.

“We Did Not Have Menstruation, We Had ‘Stomach Aches’”

Menstruation has historically been considered a taboo, also in Norway. Recently, a new international wave of menstrual activists, medical professionals, and advertising has argued that it is important to fight this taboo to counteract shame, embarrassment and pain. As part of this shift, menstrual history has been explored in many countries and cultures, including Scandinavia. This article expands upon these histories, by presenting a biography of Norwegian menstruation in the twentieth century. It draws on women’s stories from 1900 to 1980 from the Norwegian Ethnological Survey, and tracks their experiences in the years before, during and after commercially available products changed the menstrual experience for most Norwegian women and girls from 1945. Placing this in an international capitalist context, the article explores what this history can tell us about menstruation as a commercial, personal and important topic.

This article will attempt to answer how Norwegian educator Kristiane Skjerve’s book on sexual education Sundhetslære for unge kvinder (1916) [Health studies for young women] can be considered a break with the traditions of its genre,and will offer explanations for its dissemination in the book market of its day. The book was commissioned by the central committee of Norwegian Women’s organizations, on the initiative of mothers’ rights pioneer Katti Anker Møller. Møller’s work for maternal rights presumed that in addition to legal rights for mothers of children born out of wedlock, young girls needed clear and frank knowledge about their own bodies. This principle of knowledge as protection was central to the social hygiene ideology and was in itself a departure from a traditional concern with protecting girls’ modesty and innocence by obfuscating the facts of life until marriage, based on the assumption that women had a softer and more fragile sexuality. It will be claimed that the book’s innovation lies in how it unified the medical objectivity of social hygiene, the values and didactics of pedagogy and the social and political goals of the women’s movement.

Representation of Lesbian and Gay Characters in Video Games

Institutional ethnography and the social organization of everyday life

By Rebecca Lund and May-Linda Magnussen

Read more about the article by Camilla Mørk Røstvik i our newsmagazine: Still embarrassing to talk about menstruation.