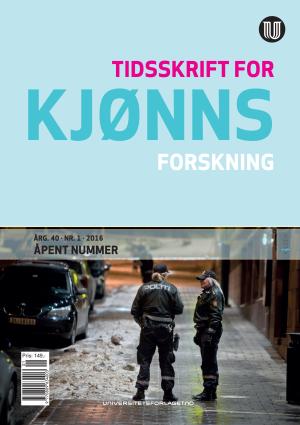 The last issue of the journal concentrated on household chores, child care and paradoxes of gender equality within Norwegian domestic spheres. This issue follows up on that by focusing on some of the gendered paradoxes of labour, especially related to the masculine stronghold in certain spheres of professional life.

This article is about women’s place in the police in light of the organisation’s institutional logics and hegemonic work methods. When women entered the police service as equals in 1958 the police had a masculine character and the police service consisted almost exclusively of men. The organizational model in this period and up until the 1970s could be described as the "power and control model". This article examines how the policewomen perceived their entry into the organisation in this early phase. The policewomen’s approach, which involved more communicative and relational work methods, was later incorporated in the community policing model, which emerged at the end of the 1970s, when the police changed in a more humanistic direction. Almost sixty years since women entered the police, we are again witness to a shift in institutional logic, from the community policing model towards what we may call the expert model, where particularly knowledge based police work is emphasized as the way forward. This article discusses these changes in relation to the construction of gender.

Gender imbalance among historians – just a question of time?

In Norway, the university and university college sector is characterized by both vertical and horizontal gender imbalance in terms of permanent, high ranking academic positions. While women today dominate among the student population, only twenty-five percent of the professors in the sector are women. Women and men furthermore find themselves located in different disciplines and scientific fields in academia with such systematism that some disciplines and fields appear to attract mostly men while others appear to attract mostly women. This horizontal and vertical gender imbalance does not fit with the general picture of Norway as an egalitarian society. This article explores some of organizational, cultural and discursive aspects of this imbalance and how it may even be understood as insignificant or unproblematic in an otherwise egalitarian context by probing into a specific discipline that has always been an «old boys’ club» in the relatively «young» Norwegian academia, namely history. Based on a study of a specific history department we will show and argue that the way that history as a discipline and the historian as an academic figure are perceived have contributed to the persistent gender imbalance in this academic discipline in Norway.

The French poet Louise Labé (152?–1564) has been portrayed for the last century as an early feminist. But is Labé’s vision of a liberated future only relevant for those who possess the «commodity» of intellectual goods? This article’s reading of the dedicatory epistle in her unique collection of poetry argues that it may indeed be regarded as a «manifesto» anticipating modern feminism. I also suggest that the rhetorical argument of her text is connected on the one hand to changes in the status of women in sixteenth century France, and on the other hand to the apparent project of Labé and her literary circle of portraying her as the «new Sappho». However, this article’s reading of the manifesto also questions whether the female liberation depicted by Labé is indeed universally attainable. The article suggests that the problems of Labé’s proto-feminism are linked to the rhetorical tropes she employs as well as to her navigation of contemporary gender conventions.

Theatre and Gender. An analysis of how Mary Lennox is being communicated in The Secret Garden

This article discusses the Norwegian Theatre’s modernization and dramatization of the classic children’s novel The Secret Garden from a gender perspective. The program and press coverage both focus on gender, especially on the main character being a girl. This article explores how Mary is communicated, and discusses the gendered statements of The Secret Garden and which attitudes towards gender they express. In this article, theatre is understood as an event, and the object of analysis is the representation of Mary in press coverage of the play, and in the play itself. The theoretical prism of the analysis consists of Pierre Bourdieu’s theory of masculinity, femininity, masculine dominance, and symbolic violence. The article concludes that Mary can be understood as a character with both masculine and feminine characteristics, but the masculine characteristics are stated and the feminine characteristics are hidden. This article’s conclusion is that the event The Secret Garden expresses complex statements concerning gender which as a whole can be interpreted as a form of symbolic violence.